A few months ago Swindon St George Rugby League club had a vision to set up it's first ever junior section to help the club grow and to allow children the opportunity to enjoy the benefits the wonderful sport of rugby league offers.

The original aim for the club was to deliver rugby league within primary and secondary schools as part of their community engagement programme to introduce children to the sport. When Covid unfortunately put an end to this in March, the club couldn't have expected the junior section to grow as rapidly as it has done. The club now has 60/70 juniors training each week and this is testament to the hard work that the clubs coaches have put in to engage with its new audience.

The rapid rise in the numbers of juniors at the club has led to them organising the first ever fixture against Oxford Cavaliers, set to take place in October. For the first time ever the club will be fielding teams at u5s, u6s, u7s, u8s, u9s, u10s and u12s.

Richard White, Swindon St George Chairman said ""It's amazing. I can honestly say that I never thought I would see the club in a position where we would be running our own junior section. Swindon has always been big for football and rugby union with not a lot previously know and rugby league. One of the more pleasing aspects of how well the juniors has been received is the number of girls who are getting Involved. We have a couple of girls in more or less every age group with us even being able to field a u7s girls' team if we wanted to."

For the future, the club hopes to continue expanding the junior section by delivering rugby league in schools and even have ambitions to run an annual schools competition.

On behalf of everyone at Swindon Sports Forum we would like to congratulate Richard and everyone at the club for their hard work and wish the juniors the best of luck in their first ever fixture.

First ever Virtual Senior Games to take place in Swindon

NGB Guidance to help your sport get back on track

Support for your group - Covid19 update 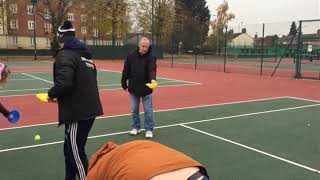